What did you do today?

Just like the thread on the old forum, you know how it works.
Last edited by a moderator: Jul 19, 2018

Went outside, shot some birds with the pellet rifle to pass the time, other then that just sat around the house

Played some riffs I came up with on the guitar and just hung around all day.

Had some success before the season is over, got 4 in total. Not sure how many over the entire season. 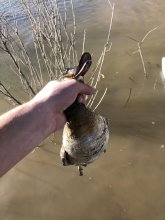 Replaced a fuel return line, and rear brake lines on the subaru. Now I'm just waiting on the caliper to show up. Ignore my bestfriend who wouldn't move out of the shot.

Brett said:
Had some success before the season is over, got 4 in total. Not sure how many over the entire season.
Click to expand...

Last year I had the opportunity to duck hunt at a place in Louisiana. Stopped at Duck Dynasty and took the tour. Was pretty neat.

Today I started installing a Craigslist Yamaha 340 engine in this thing. Just gonna send it. 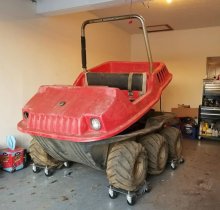 Helped a co-worker move their 5th wheel across town to a different lot. With the truck I sold a year ago. lol

Made some more riffs with my bandmate Andrew

I tried to fix 2 computer mice (both of which are broke, 1 is a gaming mouse the other just a standard wireless mouse) learned that one would never work again, so chucked it across the room. My gaming mouse has a broke backplate and a dodgy left click button and the USB is corrupted or sumthin so it won't work on my laptop. Gonna buy another mouse in the week sometime xD

Dropped the trans 3/4 of the way in the Ranger. Found out the floor hole isnt quite large enough for the shifter to slide back enough for it to drop. Time for the death wheel! Don't worry, I'll weld it back in...flawlessly....
S

Location
The void, they have great tacos.

Joined RoR forum again, for some reason my account got removed.

Early birthday present to myself.

Just saw a pretty rare Renault Alpine A310 V6 at the gas station, too bad I didn't have pics

Finally got the brakes properly sorted, and back on the ground. Cleaned my trail truck up, only to back it into a pole and dent in the only straight panel on the truck. :\
Popped the dent mostly, and will un-scuff the paint if I can. Gonna clean the dent up some more because oddly enough I care about the body some even on such a rustbucket. Still have to replace the double-cardan on the front end of the transfer case.

Proceeded to drop the trans on the project Ranger. It's out and on the ground, and it appears the sleeve between the clutch fork and spring are missing, so the fork doesnt engauge the clutch when moved.

Got wheel bearings to do on mom's truck. That and the power wagon are another day.

Well I guess this thread died. Trans is back in and it runs again. Now I gotta do all the hydraulic clutch work. Yay.

Watched the Daytona 500 with friends.

My Thinkpad has been down for awhile since I had to take the SSD out to save my desktop, and I had put the secondary HDD in the laptop I traded the Subaru for. And with the memory shortages I had been neglecting putting it back together due to cost. BestBuy has been having some deals I just simply couldn't refuse, so it's back in action now.

I also got some new shoes since Zumiez was having a sale. 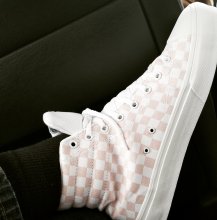 Helped dad fix the daytime running lights on our 02 Yukon. It did the normal burnt socket thing, so we replaced those, the cracked housings, and the side markers. Still need to figure out the intermittent fog light issue but that's another battle.

Finished the paintwork on thatsubaruinblue, and picked up a stereo for dirt cheap.