Charger said:
As a preface let me start by saying these are Development Builds. They are not fully polished releases and no one should expect them to be, it is a privilege, not your right that the devs even release these builds for users to try new features. So you need to take a few steps back from your entitled attitude.

The "crap texture quality" is not an issue with textures, but shaders. The migration to Ogre 1.11 is still a work in progress, and the issues you're describing were caused by the incomplete migration of Caelum sky. This issue is fixed in the latest dev builds.

As far as performance, part of the solution lies in your post, turn off HQ reflections, it's obvious your PC can't handle them. To further track down any performance issues, load a map and spawn a physics intensive car, get in the car and take note of your FPS, then pause the physics with J. If your FPS increases at all that means your FPS is being limited by your CPU. You may be able to help this a little bit by adjusting the "NumWorkerThreads" setting in your RoR.cfg file. The default setting will be "=0", assuming you have a quad core CPU you'd probably want to set it to 3, which would use 3 of your 4 available threads.

Now for the "broken" 0.4.7. The 0.4.8 dev build and 0.4.7 have slightly different options within the configurator, meaning their config files can't be shared by both versions. So if you want to use 0.4.7 or vice versa, you have to delete RoR.cfg and let the configurator generate a new file.


Again, issues are to be expected with development releases. If you don't want to experience new issues then it's best to leave testing to users who can deal with them and help further development by aiding the devs in finding solutions, or even just report them properly instead of whining on the forum.
Click to expand...

Okay. I realize I do come across as entitled, and that wasn’t intended, so I apologize about that. I was confused about the shaders, as I never used HQ reflections in 0.4.7, and so I didn’t understand why they were acting like that. I was also confused why I got worse performance even with them off, which I still don’t totally understand.

Thank you for the performance tips, I’ll give those a shot.

I understand and appreciate the work that goes into Rigs of Rods and these development builds better now.
Sorry about that last post.
I

I get the Fatal Error Message everytime

Imcool said:
I get the Fatal Error Message everytime
Click to expand...

Please post a screenshot of the error message you receive.
I 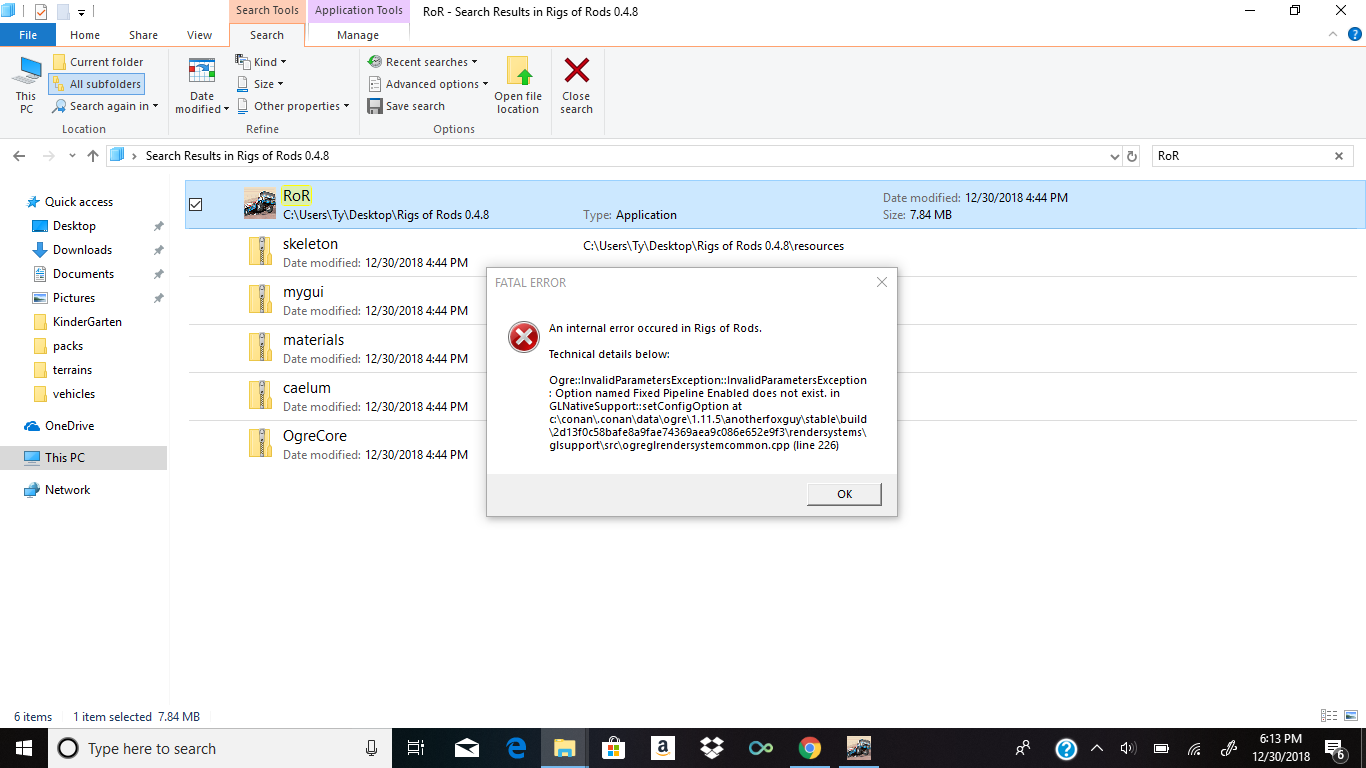 Remove "Fixed Pipeline Enabled=Yes" from the OpenGL section of ogre.cfg (Located in Documents\Rigs of Rods 0.4\config).

On the latest Linux Devel build, after building the cache, it crashes with these errors:

Code:
If I empty my .rigsofrods folder, it starts fine.

Check if RoR has permissions to write to the ~/.rigsofrods directory.

just clean your .rigsofrods/cache dir and start RoR to regenerate it

I tried that, but the exact same thing happens, could there be a problem with a vehicle/terrain that makes it so it can't cache correctly?

Probably, clean your packs dir, add a small amount each time and see which is causing the problem
D 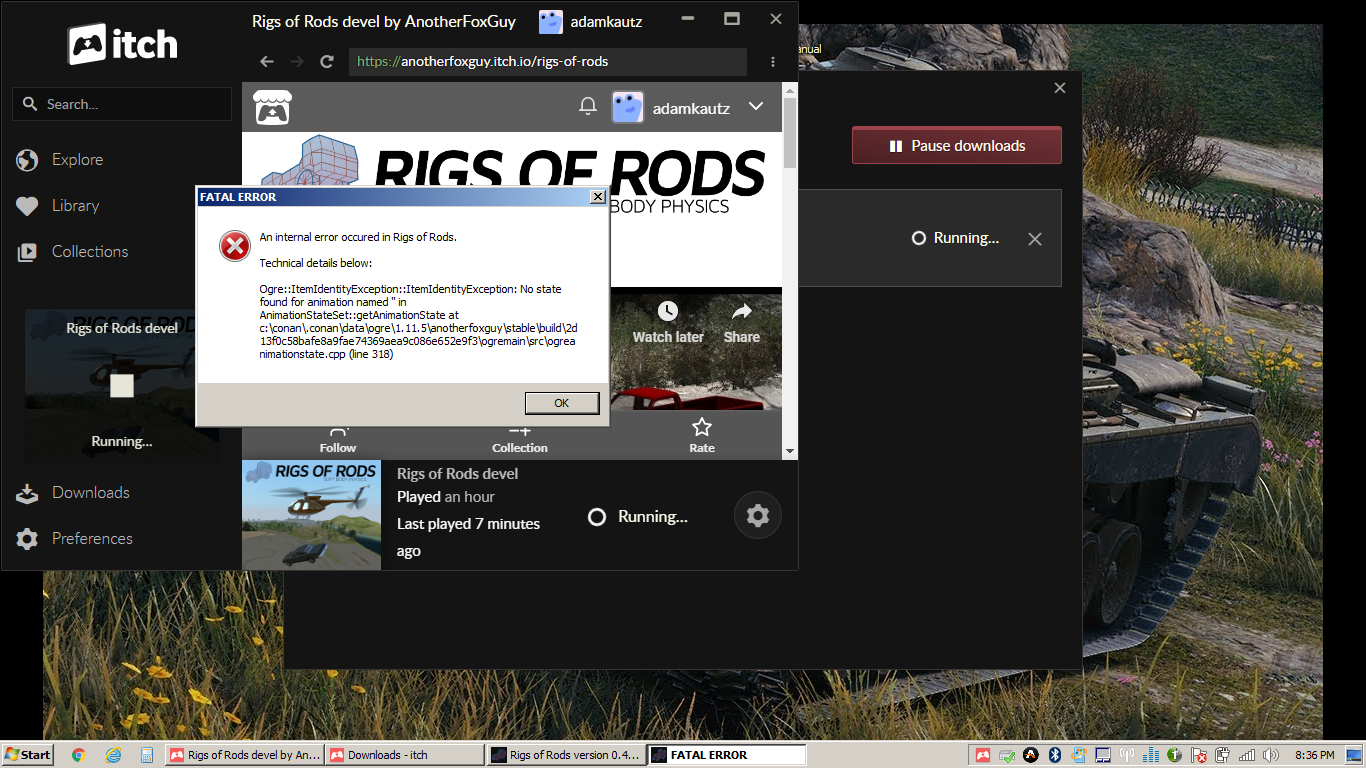 I love the update otherwise. thx!!
I

My game just self exit's every time I try to spawn in a vehicle, log doesnt say any errors at all just auto exiting.

mine is working fine now. i think i just had to restart itch and the game.

thx for the reply and thx for making the update!!

The latest build works great for me on Linux, ground textures work correctly and Caleum is better than ever.
I've just noticed the ability to bump start vehicles in RoR now! It's an amazing realism touch that not many simulators have

When i dowload rc3 version will my mods actually save becasue i have over 600 mods and dot want them deleted so if i download new version will i got my old mods without installing em again?

trucker2019 said:
When i dowload rc3 version will my mods actually save becasue i have over 600 mods and dot want them deleted so if i download new version will i got my old mods without installing em again?
Click to expand...

RC4 and the development builds use the same Documents folder. You won't lose anything.

This thread is for the latest development builds, not the release candidates. The latest RC is RC4:

Hello everyone, and welcome to the 4th round of the 0.4.8 release candidates! This RC has been focused on fixing and improving multiplayer Changes since RC3: 🔧 Auto-scale reflection textures 🎮 Resurrected the race results submission 🔧 More beautiful (and coloured) netlabels: 🐛 Fixed the...

As for the error, try opening ogre.cfg (Documents\Rigs of Rods 0.4\config) in a text editor and change